Khalid Samad Outrage, Is the Royal Institution Under Threat?

I am surprise that Khalid Samad had taken the bull by its horn to ridicule the constitutional power of the Sultan of Selangor by using netizen's comments as a barometer to gauge the people's hostility toward the Sultan's absolute power,  a lie concocted to confuse the people, the Sultan has no absolute (mutlak) power. Story here.

As a lawmaker Khalid Samad should know better that the Sultan of Selangor and for that matter all the sultans in this country do not have absolute power. They only have constitutional power accorded to them under the constitution of their respective state.

I produce below the relevant section of the Selangor state constitution of the Sultan's power in the appointment of menteri besar: 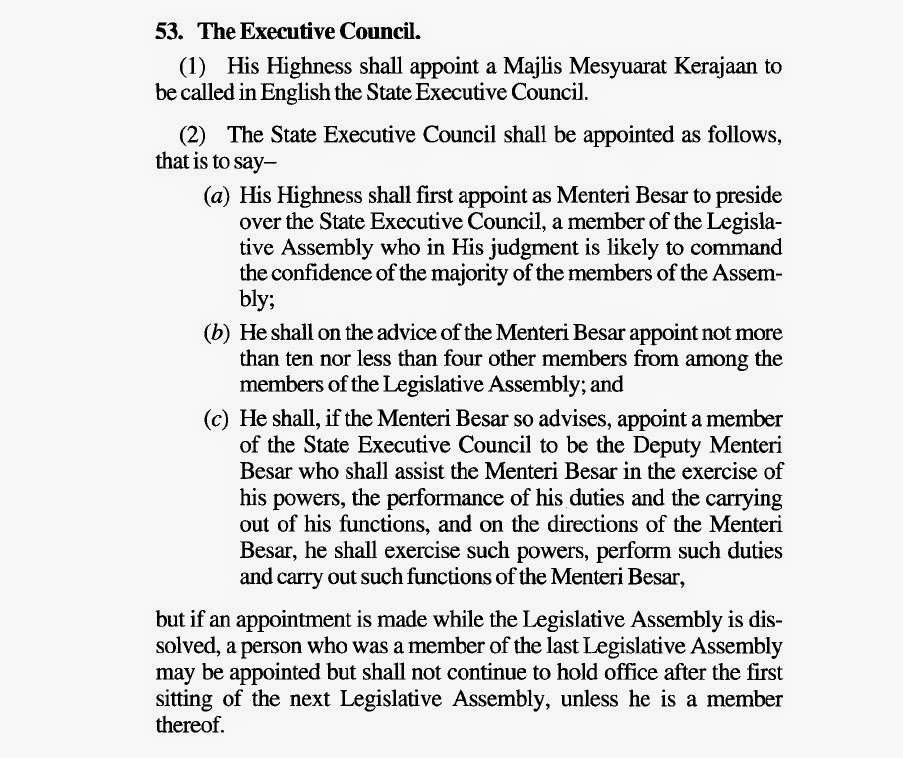 I suppose the whole of the Pakatan gang is now worried that they may have to face the truth that the Sultan has the power given under Article 53 (2) a to ask for dissolution of the Assembly if it's in his judgement that Wan Azizah is not likely to enjoy majority support of the house.

You can produce 40 signatures to show majority support for Wan Azizah, but it would still be up to the Sultan to accept or not to accept the majority resolution if he has any reasonable doubt.

This is the first time a Malay lawmaker had openly ridiculed the power of the sultan and used a rather stupid measure of netizen comments as opinion poll to justify his reproach of the Sultan even before the Sultan had acted on the matter.

For Khalid Samad information all comments that appeared in pro-Pakatan news portal such as Malaysian Insider, Malaysian Chronicle, Free Malaysia Today and so forth are filtered to allow only pro-Pakatan voices to get through and any adverse or anti-Pakatan comments are deleted on the spot.How he used it as a kind of opinion poll is difficult to understand.

Looking at the chain of events in Selangor and the angst against the Sultan will the monarchy system be under threat should Pakatan Rakyat come to power at the Federal level?

Unlikely, but with the rumbles of discontent one wouldn't know what the future beholds.

Let us throw Khalid Gereja into Southern Indian Ocean. This bloodyfool is a traitor to his own race, Islam and Sultan.

If we see him any where, spit onto him to show our displeasure. He is a disgrace even to his learned brother Shahrir.

Talk about selective comments by Mr Khalid Samad, how about yourself ?

Mr Samad did not just use Netizens comments as his ONLY justifcation.

He also said it was the grand old fool himself Dr Mahatiu that said Sultans have NO power other than that constituitionally given.

Very mischevious of you to leave out the part where Mr Samad said one of the other reasons he said what he said was the grand old fool's comments that was made.

So now you use dear Tun Dr Mahathir to prop up your desperate argument, huh??

Born a fool will always be a fool.

Comments
Past Articles In Asia Sentinel

Will Sabah Change Shirts In The Malaysian Elections ?